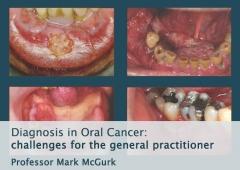 Diagnosis in Oral Cancer: challenges for the general practitioner 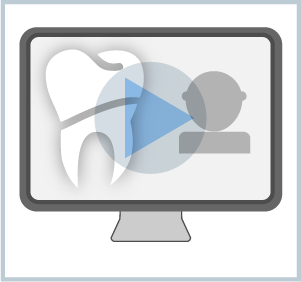 There is a drive in the NHS for early diagnosis.  If this is to be achieved, practitioners must be able to recognise cancers.  The problem is that a practitioner holds about 50,000 consultations before a head and neck cancer is identified.  In law this is not accepted as a reason to overlook a cancer.  The aim is to demonstrate tumours that regularly present a diagnostic challenge and arise repeatedly in medico-legal disputes.

On completion you should be familiar with techniques to help identify most tumours in the head and neck.

Professor in Oral and Maxillofacial Surgery


Professor in Oral and Maxillofacial Surgery
King’s College London - Guy’s and Thomas’ Hospitals Foundation Trust
Professor McGurk undertook his undergraduate Sheffield University BDS in 1976. This was followed by SHO posts and six months visiting maxillofacial units in the United States. He returned to Sheffield to complete a medical degree in 1984. He held a lectureship at Manchester University and was awarded a DLO and an MD during this period. He was appointed consultant oral and maxillofacial surgeon to Queen’s Medical Centre, Nottingham in 1991 and the following year professor of oral and maxillofacial surgery at the Dental Institute at Guy’s, King’s College and St Thomas’ Hospitals. Professor McGurk’s clinical practice has polarised around head and neck cancer surgery and salivary gland disease. His research has focused upon early diagnosis and factors leading to complications of surgery and issues of quality of life following head and neck cancer. A general theme which has gained more momentum in the last 10 years is the introduction of minimally invasive surgery to the head and neck. He has championed minimally invasive surgery for benign parotid tumours and obstructive salivary gland disorders. A European trial of sentinel node biopsy has been completed. Research grants include facial reconstruction with rapid prototyping technology, bone lattice and stem cell research.

TDC Admin
Group Information View All
Here are some of the group discussions for this course
Has the fact that oral cancer is GDC recommended subject improved your awareness of this subject?

@dentalchannelukThe Dental Channel
Our sincere thanks to Dr Upen Patel for his super presentation on removable prosthetics. We look forward to welcomi… https://t.co/nnafMEFoBE
Link to post

@dentalchannelukThe Dental Channel
A date for the diary: Thursday 9 September at 8pm when our Evening Expert webinars resume after the summer break. L… https://t.co/tDsAbDlkkj
Link to post

@dentalchannelukThe Dental Channel
A date for the diary: Thursday 9 September at 8pm when our Evening Expert webinars resume after the summer break. L… https://t.co/j5TTL4hCJc
Link to post

@dentalchannelukThe Dental Channel
A date for the diary: Wednesday 1 September at 8pm when our Evening Expert webinars resume after the summer break.… https://t.co/fJE4ltkRqj
Link to post

@dentalchannelukThe Dental Channel
A new document to support dental professionals and help clarify when NHS dental treatment might be phased over seve… https://t.co/23z892Mtw3
Link to post

@dentalchannelukThe Dental Channel
The end of the CPD year for DCPs is fast approaching. Don't get caught out like thousands do each year... https://t.co/bJwzt7abdd
Link to post

@dentalchannelukThe Dental Channel
TONIGHT at 8pm Dr Andrew Dawood presents '3D Imaging in General Dentistry'. If you have not participated in an Even… https://t.co/ak8zW439B6
Link to post